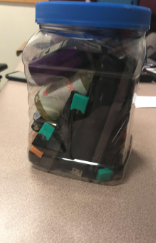 Portsmouth NH – Vaping is an issue at Portsmouth High School, and quickly becoming an epidemic. Multiple resources and staff members are working their hardest to stop students from vaping. After interviewing Principal Lyons, Officer Lynn, and Tony O’Connell it turns out the problem is serious.

Vaping nicotine is dying down, but they said they were more concentrated on students who are vaping THC during the day. Administration is patrolling the hallways and bathrooms and looking for signs of students vaping.

They didn’t share some of the tactics they were using, but multiple people in a bathroom stall is cause for concern. Principal Lyons said the school considered devices to monitor vaping the bathroom  and almost got them.

The school did a lot of research and found they weren’t reliable, so they weren’t purchased. When asked if the vape technology were more reliable, would the school purchase the monitors, Principal Lyons said, “Yes, absolutely. We would definitely get it to prevent kids from taking a dangerous health risk.”

There are also multiple new posters around the school, which are for hotlines for students who are addicted to vaping and need help. The school wants to educate these students, and not just “punish” the ones vaping in the bathrooms. They also want to educate parents and staff. Officer Lynn said, “Punishment isn’t curing the problem. We should educate and not punish.” They believe that education is important because vaping is bad for your body, and if you learn the consequences, you might stop.

Some of the risks are that you can get health problems that show up very fast. These symptoms are very aggressive and move really quickly. They are things like popcorn lung and other strange issues that harm your lungs.

Vaping is still an issue here at Portsmouth High School, but with kids learning about the consequences, it might be getting better.