Trippie Redd Reaches No. 1 on Charts with “A Love Letter to You 4” 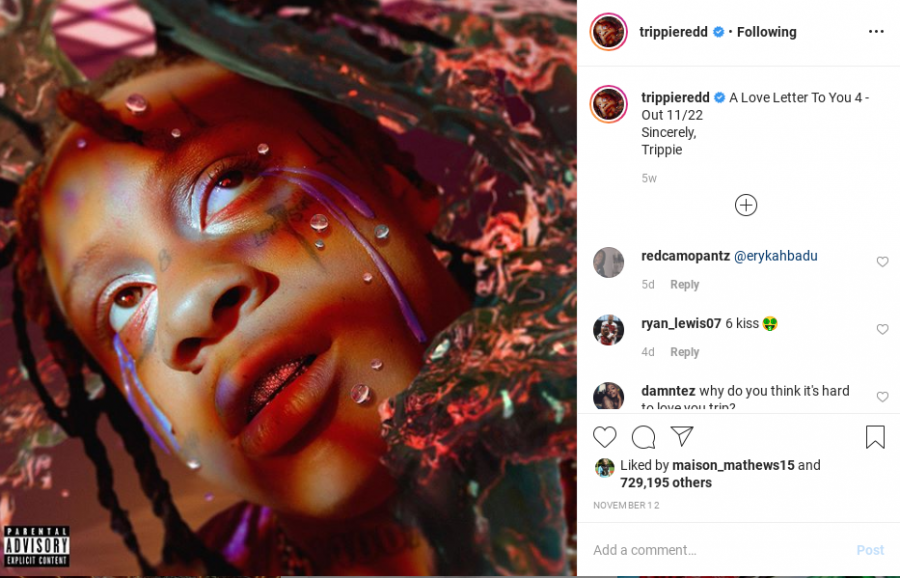 On November 26, 2019,  Trippie Redd released “A Love Letter to You 4” (ALLTY4). There are 21 tracks with features from artists such as Dababy, Lil Mosey, NBA Youngboy, Juice WRLD, and more. This was Trippie Redd’s sixth album since coming onto the scene in 2017.

This album reached number one on the Billboard charts making Trippie Redd one of the only remaining popular rappers from the 2016-2017 Soundcloud wave. After the passings of X and Lil Peep, the fall off of Lil Pump and Lil Yachty, and the locking up of TayK and 6ix9ine, there a few rappers that remain on top from that class.

The album has a variety of styles from love songs to lyrical rap. Trippie Redd definitely did not disappoint.

One of the most talked-about songs on the album is “6 Kiss”, featuring Juice WRLD and YNW Melly (2 rappers who we may never see again after Juice WRLD’s death and Melly’s murder case). The song starts with a melodic Juice WRLD opening verse into a very classic Melly verse the song is a 100% banger. But that’s not the only gas on the album.

“Hate me”, “Can you Rap Like me Pt 2”, “Death”, and “RMP” are all very good songs. But “M’s” featuring Lil Yachty and Pierre Bourne are definitely the most slept on. When Matt Hudlin, a Freshman here at PHS, was asked about the hardest beat and the best feature on the album. he responded with the beat from “M’s” which was produced by Pierre Bourne and Pierre Bourne’s feature on that same song. He went on to say “Pierre is the best producer in the game.”

After Trippie Redd’s underwhelming “!” album in August, a lot of people felt like he may be falling off or past his prime. When asked about his thoughts on this, Hudlin responded with “I never felt like that because he has always made hard songs and even on that album (“!”) there were a couple good songs.”

Overall “ALLTY4” is definitely worth listening to no matter what genre of rap you prefer there is definitely a song for you on the album.