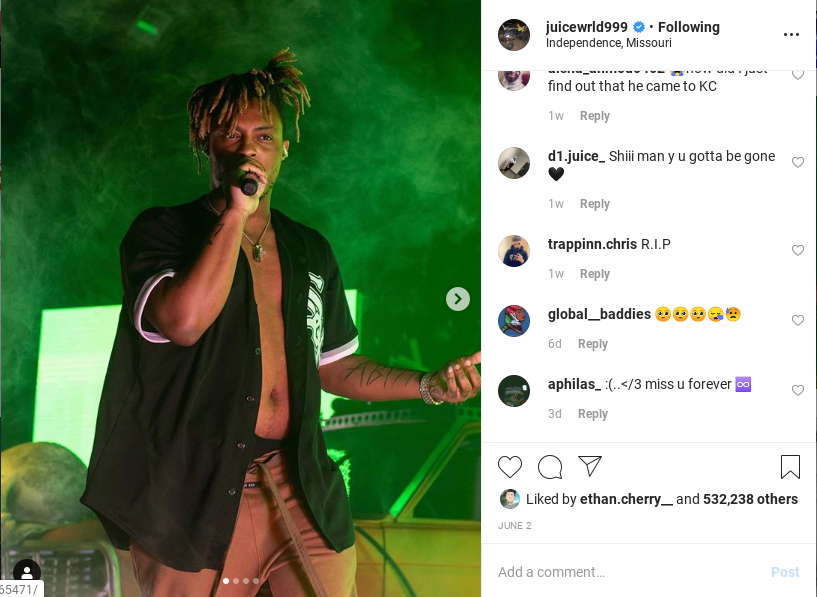 On Sunday, December 8th, 2019, Jarad Anthony Higgins A.K.A Juice WRLD a young talented rapper tragically passed away. Higgins had a seizure in a Chicago airport due to ingesting multiple prescription pills.

As Higgins was being transported to the hospital the FBI searched his private jet. The jet was searched because one of the pilots called the police about guns on the plane. Reportedly, in the jet officials found 70lbs of marijuana, an empty bottle of codeine, and multiple guns.

One of the songs that Higgins released named ̈Legends ̈ had a lyric that sadly came true. The line was ̈What’s the 27 club? We ain’t making it past 21 ̈ Higgins then passed away six days after his 21st birthday. Along with that, another song named ̈Rich and blind¨ had a similar lyric saying ̈They tell me the death of me gon ́ be the Perkys.¨

These recent deaths of rappers including Higgins ́ friends XXXTentacion and Lil Peep were all something Higgins was always talking about. Higgins ́ death has and will keep affecting people all over.