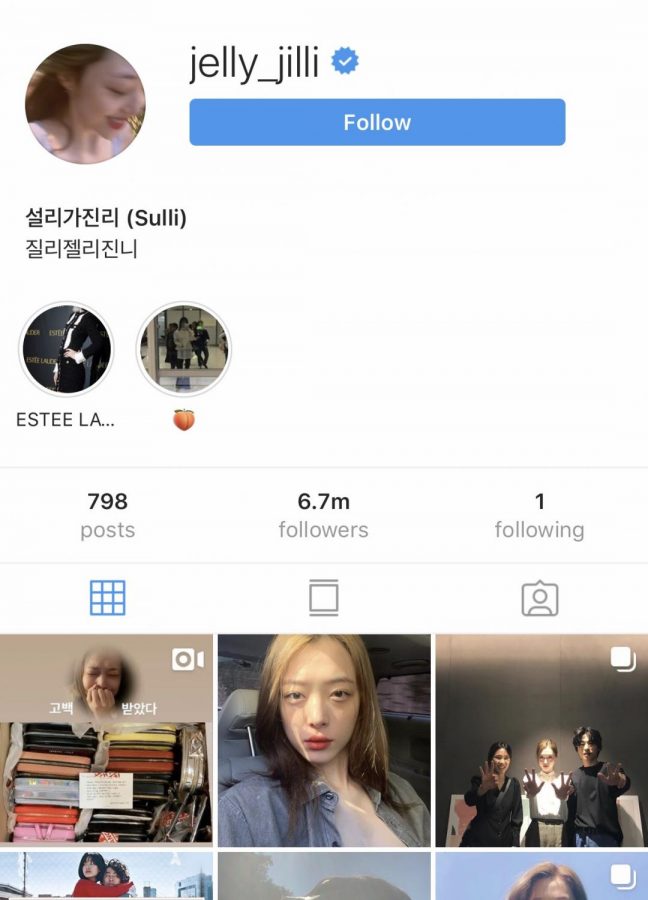 A tragic event struck South Korea last week on October 14th, as a famous South Korean singer committed suicide. Sulli, whose real name is Choi Jin-ri was found dead at age 25. According to the Korea Times, Sulli’s body was discovered by her manager at around 3:21 p.m. at a two-story house in Seongnam, Gyeonggi Province.

Sulli was born on March 29th, 1994 in Busan, South Korea. Not too long after that, she decided to move by herself to Seoul in 2004 when she was 10. That’s when she applied for the audition of S.M. Entertainment and became a trainee.

She began her professional acting career at the age of 11 in 2005. A few years later, Sulli joined the music industry, when she made debut as a member of the K-pop girl group f(x) in 2009.

Sulli was viciously attacked online in 2014 after paparazzi photos revealed she was dating an older rapper named Choiza. She then put her career on hold due to cyber-bullying, and returned the following years but left the girl group to focus on acting.

According to the Metro newspaper, S.M. Entertainment stated that Sulli became mentally and physically exhausted from the continuous, malicious comments, and false rumors at the time she took a break from her career.

In her reality show, Jinri Store, which aired in 2018, the Busan-born star opened up about her experience of anxiety and panic.

Sulli said: “I’ve had panic disorder ever since I was young… Some of my closest friends have left me. People hurt me, so everything fell apart. I didn’t feel like I had anyone on my side or anyone who could understand me. So that’s why I completely fell apart.”

The former f(x) member once reported an internet user who posted a malicious comment about her online but decided not to at the last second when she found out that person is still a student of a famous university who’s the same age as her.

Sulli kept on showing signs of mental disorder as she was crying, and saying “I’m not a bad person. Why are they keep saying bad stuff to me? Tell me one thing I did to deserve this” in a recent video she posted on Instagram. Sulli also had been suffering from severe depression before ending her life.

Two years ago, Sulli suffered the loss of a close friend, Jonghyun, who was a singer from the same company as her. He committed suicide at the age of 27 also due to cyber-bullying and depression.

After the shocking news of Sulli’s death, many people have realized the dark side of the K-pop industry where celebrities suffer from depression and bullying. They have to deal with malicious comments every day even though they did nothing wrong.

According to the World Health Organization, South Korea has the 10th highest suicide rate in the world.